A bag of Spice brand herbal incense. This contains synthetic cannabinoids which produce a similar effect to that of cannabis.

Synthetic cannabinoids are usually sprayed or soaked into dry herbs to look more like marijuana,[1] but pure powder is also available for sale on online research chemical markets. They are commonly smoked or vaporized to achieve a quick onset of effects. They are also orally active when dissolved in a lipid, which can increase the duration significantly. Most are insoluble in water but dissolve in ethanol and lipids.

Unlike cannabis, the chronic abuse of synthetic cannabinoids has been associated with multiple deaths and more dangerous side effects and toxicity in general. Therefore, it is strongly discouraged to take these substances for extended periods of time or in high doses. Additionally, many synthetic cannabinoids have almost little to no human research and some pose more severe health risks than others. It is highly advised to use harm reduction practices if using these substances. 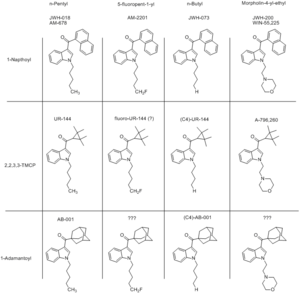 Popular herb blends include K2[2] and Spice,[3] both of which are generic trademarks used for any synthetic cannabinoid product. Synthetic cannabinoids are often marketed as "herbal incense" and "herbal smoking blends." Pre-mixed, branded blends (like Spice and K2) are more dangerous than pure powder because the specific chemicals and dosages are usually unlisted as well as the potential of inconsistent areas of dense powder, leading to an overdose.

Many people have been hospitalized or suffered negative symptoms believing they are comparable to cannabis in potency, harm potential, and effects. This is not the case, and they should be avoided in favour of pure powder.

For a comprehensive list of known synthetic cannabinoid derivatives, /r/Drugs/wiki has published a respectable directory of names and links to further information.

Unlike cannabis, there have been multiple deaths[4][5][6][7][8][9][10] associated with the repeated abuse of synthetic cannabinoids as well as serious side effects resulting from its long-term use.[11][12][13] Therefore, it is strongly discouraged to take this substance for extended periods of time or in excessive doses. Compared to cannabis and its active cannabinoid THC, the adverse effects are often much more severe and can include high blood pressure, increased heart rate, heart attacks,[14][15] agitation,[16] vomiting,[17][18][19] hallucinations,[20] psychosis,[21][22][16][23] seizures,[24][25][26] and convulsions[27][28] as well as many others. Sixteen cases of acute kidney injury resulting from synthetic cannabinoid abuse have been reported.[29] JWH-018 has also been associated with strokes in two healthy adults.[30]

It should be noted that pre-mixed, branded blends (like Spice and K2) are more dangerous than pure powder because the specific chemicals and dosages are usually unlisted as well as the potential of inconsistent areas of dense powder, leading to an overdose. As synthetic cannabinoids are active in the milligram range (with below 5mg being a common dose), it is important to use proper precautions when dosing to avoid a negative experience.

These more severe adverse effects in contrast to use of marijuana are believed to stem from the fact that many of the synthetic cannabinoids are full agonists to the cannabinoid receptors, CB1R and CB2R, compared to THC which is only a partial agonist and thus not able to saturate and activate all of the receptor population no matter of dose and resulting concentration.[31]

It is strongly recommended that one use harm reduction practices when using these drugs.

Like THC, prolonged usage of synthetic cannabinoids may increase one's disposition to mental illness and psychosis[22], particularly in vulnerable individuals with risk factors for psychotic illnesses (like a past or family history of schizophrenia).[32][33][16] It is recommended that individuals with risk factors for psychotic disorders not use synthetic cannabinoids.[34]

In contrast to most other recreational drugs, the dramatic psychotic state induced by the use of synthetic cannabinoids has been reported in multiple cases to persist for several weeks, and in one case for seven months after complete cessation of drug use.[35] It has been suggested that the lack of an antipsychotic chemical (the cannabidiol found in natural cannabis) may make synthetic cannabis more likely to induce psychosis than natural cannabis.[23] As with the acute adverse physical effects, this increase in the risk of psychotic side effects has also been connected to full rather than partial agonism.[36]

When compared to cannabis, the chronic use of synthetic cannabinoids can be considered more moderately addictive with a high potential for abuse and is capable of causing psychological dependence among certain users. When addiction has developed, cravings and withdrawal effects may occur if a person suddenly stops their usage.[41]