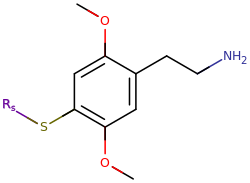 The general structure for a 2C-T-x compound

2C-T-x is a subset of the 2C-x series. Alexander Shulgin has discovered over 25 2C-T-x compounds and more are currently being made by individual scientists such as Daniel Trachsel[1].[2]

The 2C-T-x series contains a very broad spectrum of compounds from barely active to fully psychedelic phenethylamines. It is theorized that all of the members are MAOIs, as it is seen within the ALEPH series[citation needed]. Many have not been synthesized yet.

Among the members, the most popular ones are 2C-T-2 and 2C-T-7, which are part of the so-called "magical half-dozen" which refers to Shulgin's self-rated most important phenethylamine compounds, all of which -- with the exception of mescaline -- he designed, synthesized and tested on himself. They can be found within the first book of PiHKAL, and are as follows: Mescaline, DOM, 2C-B, 2C-E, 2C-T-2 and 2C-T-7.[3]

The 2C-T-x chemicals, as with many other serotonergic psychedelics, should not be taken in combination with SSRIs (selective serotonin reuptake Inhibitor) or tricyclic antidepressants in general to avoid serotonin syndrome, a potentially life-threatening condition in which an abundance of serotonin is built up the body, causing many physical and cognitive health problems.