6-Propynyl-6-nor- Lysergic acid diethylamide (also known as N-Propynylnorlysergic acid N,N-diethylamide[1], N-PropynylnorLSD[1] or simply PARGY-LAD[1]) is a novel synthetic psychedelic substance of the lysergamide chemical class that produces a similar albeit significantly less distinct array of LSD-like psychedelic effects when administered. It is a close structural homolog of LSD known mainly for its obscurity and lack of distinguishing features.[1]

PARGY-LAD was first briefly mentioned as an analog of LSD by Alexander Shulgin in his book TiHKAL ("Tryptamines I Have Known and Loved"). It has been reported to be significantly less potent than LSD itself with "some activity reported at 160 μg" and "full activity at 500 micrograms."[2]

Very little data exists about the pharmacological properties, metabolism, and toxicity of PARGY-LAD, and it has very little history of human usage. It has recently appeared on the market alongside research chemical psychedelic lysergamides such as AL-LAD, ETH-LAD and PRO-LAD as a legal, grey-market alternative to LSD, and commercially distributed through online research chemical vendors, and is considered to be one of the least popular and available in the series. It is highly advised to approach this unstudied hallucinogenic substance with the proper amount of precaution and harm reduction practices if choosing to use it. 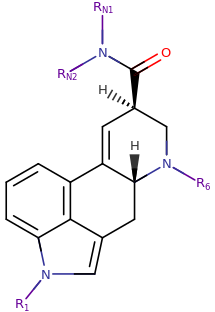 Substitutive structure of a lysergamide.

PARGY-LAD, or 6-propynyl-6-nor-lysergic acid diethylamide, is a synthetic alkaloid of the lysergamide family. PARGY-LAD is a structural analog of lysergic acid, with an N,N-diethylamide functional group bound to RN of the chemical structure. This core polycyclic structure is an ergoline derivative, and has overlapping tryptamine and phenethylamine groups embedded within it (although it is principally classed as a tryptamine).

PARGY-LAD likely acts as a 5-HT2A partial agonist. The psychedelic effects are believed to come from PARGY-LAD's efficacy at the 5-HT2A receptors. However, the role of these interactions and how they result in the psychedelic experience continues to remain an object of scientific elucidation.

The toxicity and long-term health effects of recreational PARGY-LAD do not seem to have been studied in any scientific context and the exact toxic dose is unknown. This is because PARGY-LAD is a research chemical with very little history of human usage. Anecdotal evidence from people within the psychonaut community who have tried PARGY-LAD suggests that there are no negative health effects attributed to simply trying the drug by itself at low to moderate doses and using it very sparingly (but nothing can be completely guaranteed). Independent research should always be done to ensure that a combination of two or more substances is safe before consumption.

While no formal studies have been conducted, PARGY-LAD is likely not habit-forming and it is reasonable to speculate that the desire to use it can actually decrease with repeated administration. As with most psychedelics, it likely possesses what is considered an intrinsic, self-regulating aspect to it.