From PsychonautWiki
(Redirected from Barbiturate)
Jump to navigation Jump to search

Death may occur when barbiturates are combined with depressants such as opiates, benzodiazepines, gabapentinoids, thienodiazepines, alcohol or other GABAergic substances.[1]

It is strongly discouraged to consume moderate to heavy dosages of these substances together. 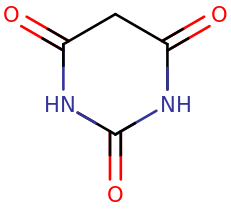 The structure of barbituric acid

Barbiturates (also known as barbs and barbies) are a class of psychoactive substances that act as depressants of the central nervous system. They produce a variety of sedative-hypnotic effects including sedation, anxiety suppression, muscle relaxation, and seizure suppression when administered.

Barbiturates have been largely replaced by benzodiazepines in routine medical practice, generally because benzodiazepines have lower toxicity compared to barbiturates. However, they are still used today for limited medical purposes, particularly as general anesthetics.

It is worth noting that the sudden discontinuation of barbiturates can be dangerous or life-threatening for individuals using regularly for extended periods of time, sometimes resulting in seizures or death.[2]

Barbiturates are based on the barbituric acid molecule. Commonly, two hydrocarbon substitutions are present at carbon R5. of the pyrimidine ring. It also contains three double-bonded oxygen substitutions at R2, R4 and R6.

Barbiturates act as positive allosteric modulators, and at higher doses, as agonists of GABAA receptors.[3] GABA is the principal inhibitory neurotransmitter in the mammalian central nervous system (CNS). Barbiturates bind to the GABAA receptor at multiple homologous transmembrane pockets located at subunit interfaces,[3] which are binding sites distinct from GABA itself and also distinct from the benzodiazepine binding site. Like benzodiazepines, barbiturates potentiate the effect of GABA at this receptor. In addition to this GABAergic effect, barbiturates also block AMPA and kainate receptors, subtypes of ionotropic glutamate receptor. Glutamate is the principal excitatory neurotransmitter in the mammalian CNS. Taken together, the findings that barbiturates potentiate inhibitory GABAA receptors and inhibit excitatory AMPA receptors can explain the superior CNS-depressant effects of these agents to alternative GABA potentiating agents such as benzodiazepines and quinazolinones. At higher concentration, they inhibit the Ca2+-dependent release of neurotransmitters such as glutamate via an effect on P/Q-type voltage-dependent calcium channels.[3] Barbiturates produce their pharmacological effects by increasing the duration of chloride ion channel opening at the GABAA receptor (pharmacodynamics: This increases the efficacy of GABA), whereas benzodiazepines increase the frequency of the chloride ion channel opening at the GABAA receptor (pharmacodynamics: This increases the potency of GABA). The direct gating or opening of the chloride ion channel is the reason for the increased toxicity of barbiturates compared to benzodiazepines in overdose.[3] Barbiturates, also facilitate accumulation of endogenous adenosine in the extracellular space by inhibiting adenosine uptake via adenosine transporters. The adenosine-induced depressions of excitatory synaptic transmissions probably contribute to the mechanisms of the anesthetic, sedative and anticonvulsant effects.[4]

It is also worth noting that these effects will not necessarily occur in a predictable or reliable manner, although higher doses are more liable to induce the full spectrum of effects. Likewise, adverse effects become increasingly likely with higher doses and may include addiction, severe injury, or death ☠. These effects are listed and defined in detail within their own dedicated articles below:

Tolerance will develop to the sedative-hypnotic, anxiolytic, and euphoric effects of barbiturates after prolonged use.[citation needed] It is unknown exactly how long it takes for tolerance to reach baseline after continued use. All barbiturates present cross tolerance with each other, meaning that tolerance to one barbiturate will lead to tolerance of all other barbiturates.

Barbiturate withdrawal is a medically serious condition and can potentially cause life-threatening withdrawal symptoms such as seizures, psychosis, and death.[citation needed] Drugs which lower the seizure threshold such as tramadol and amphetamine should be avoided during withdrawal. If an individual is addicted to a shorter-acting barbiturate such as pentobarbital, switching to a longer-acting barbiturate such as phenobarbital may prove beneficial.[citation needed]

Barbiturate overdose may occur when a barbiturate is taken in extremely heavy quantities or concurrently with other depressants. Combining barbiturates with other GABAergic depressants such as benzodiazepines and alcohol is particularly dangerous because they all work in a similar fashion but bind to distinct allosteric sites on the GABAA receptor, thus potentiating one another. Benzodiazepines increase the frequency in which the chlorine ion pore opens on the GABAA receptor while barbiturates increase the duration in which they are open, meaning when both are consumed, the ion pore will open more frequently and stay open longer[5]. Barbiturate overdose is a medical emergency that is commonly known to induce coma, permanent brain injury, and death if it is not treated promptly by medical professionals. Barbiturate overdose has an increased frequency of serious adverse effects when compared to other depressants.[citation needed]