Members of the NBOH series can easily be fatal at higher doses.

It is strongly discouraged to take high doses of these substances or to insufflate (snort) them. Please see this section for more details. 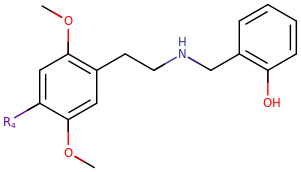 The general structure for a 25x-NBOH compound

25x-NBOH refers to the general form of the NBOH series of psychedelic phenethylamines. It is closely related to the better known 25x-NBOMe series.

The members of the 25x-NBOH series are generally slightly less potent and have a shorter duration than their NBOMe counterparts. Anecdotal evidence suggests minor differences in the physical and subjective effects between the two series.

For example, members of the 25x-NBOH are reportedly more favorable than their NBOMe counterpart in terms of their appreciable body-load. This may be due to the possibility that they are less well absorbed, as they otherwise have similar binding affinities.[citation needed]

The series has little or no history of human use prior to 2012 when NBOMe analogs became available for purchase from online research chemical vendors.

Members of the 25x-NBOH series are not not habit-forming and the desire to use them can actually decrease with use. They are thought to be mostly self-regulating.

Tolerance to the effects of 25x-NBOH is built almost immediately after ingestion. After that, it takes about 1 week for the tolerance to be reduced to half and 2 weeks to be back at baseline (in the absence of further consumption). 25x-NBOH presents cross-tolerance with all psychedelics, meaning that after the consumption of 25I-NBOMe all psychedelics will have a reduced effect.

Combinations with the following substances can cause dangerously high serotonin levels. Serotonin syndrome requires immediate medical attention and can be fatal if left untreated.